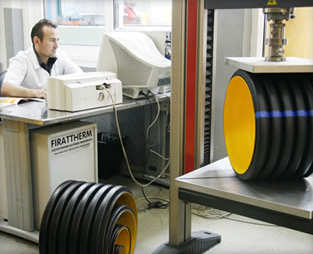 The standard of Fırat Triplex Pipe produced with double wall from high density polyethylene (HDPE) is TS EN 13476-3. Inside of Triplex pipes, produced in ring rigidity classes of SN 4 kN/m² and SN 8 kN/m² is smooth structured to facilitate the water flow, exterior is ribcage structured.

A sewage piping system is an integrity which is composed of fittings and seals and each element must have same performance and adaptation. Seal in the system is CE-marked and meets requirements of EN 681.

Since Triplex sewerage pipes are designed to have elasticity properties according to ATV A 127 standard, their deformation tolerances are tested under this standard. Tightness tests of the installed pipe system are conducted according to EN 1610.