Cyprus island is not very rich when it comes to water. Almost the entire need for water of the island is supplied with the underground water. Because of the reasons such as the fact that the scrapheaps are very close the water sources and the fact that the table water is mixed with the underground water, the quality of water in Cyprus is constantly decreasing and the water potential is dropping every day. Ministry of Forestry and Water Affairs has developed many projects such as carrying water in balloons to supply TRNC with water. It is noticed that most convenient way to solve the water problem in TRNC for a long-term is water transmission. In this context, TRNC Drinking Water Supply Project which is going to solve the water problem concerning TRNC for a long-term, has been implemented. The water taken from Alaköprü Dam which has been built in the context of this project is transferred from the sea to Geçitköy Dam which was built in TRNC. 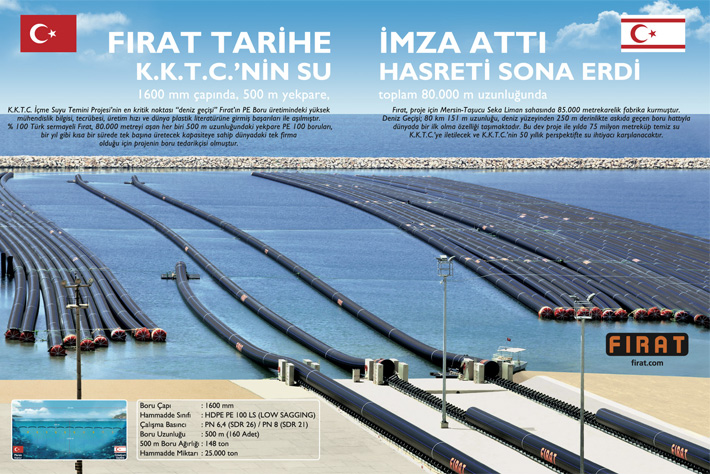 This enormous project has 3 branches including Turkey branch, sea transmission and TRNC branch. The most critical points of the TRNC Drinking Water Supply Project are the pipes carrying the water through the sea. Thanks to the professional engineering knowledge, experience, speed of production and the successes, which has been entered in the world plastic literature, of Fırat, it has been preferred for this project. In this project, Fırat with 100% Turkish Capital is the only company that has capacity to  manufacture 160 HDPE pipes manufactured as one piece each of which have a length of 500 meters by itself alone in such a short term as one year in the whole world. The Norwegian company offered that it can produce only 15 kilometers of pipes in a year. Unless Fırat had manufactured these pipes in one year, Northern Cyprus would have suffered from lack of water and as TRNC Prime Minister Mr. Mustafa Akıncı says, they would have continued to brush their teeth with the sea water for 5 more years. With our experiences in engineering and plastic manufacturing, we succeeded this project by having its cost $ 50 million less and we had the equity capital of our country stayed in. Manufacturing PE 100 Pipes in one piece of 500 meters for water treatment projects in two different cities Fırat has benefited its experience in this project.

Reflections on the Press

Fırat has rented an area of 85.000 square meters in Mersin-Taşucu Seka Harbour and built a factory composing of a closed area of 4400 square meters to implement this project. In the facility, 3 large extrusion areas have been built for PE 100 pipe manufacturing. Sea Transmission has characteristics of 80 kilometers 151 meters of length, depth of 250 meters and hung PE 100 pipe line and being a first in the world. Fırat has manufactured a total of 160 pipes which have diameters of 1600 mms, lengths of 500 meters solid, and pressures of PN 8 and PN 6,4 bars. 25.000 tons of raw material have been used in the project. Production of 160 pipes have been completed on January 14, 2014.

75 million cubic meters of water is going to be delivered to TRNC with this enormous project. When the project is run, TRNC will have a source to be supplied with water in a perspective of 50 years. The water delivered can be used for drinking, usage, industry and watering and there will be a significant contribution to the economic development of the region with the area of 4.824 hectares to be watered by the project. Sharing all of its sources with Northern Cyprus until today, Turkey will now share its water with Northern Cyprus.

Thanks to this Project, our country has broken the full scale monopoly in the one piece pipe market in the whole world and now have a voice in the global projects. Indeed, not only Fırat but also our country has gained accredit with this project. Fırat is proud to have participated in the most critical point of this project. This project is not a tender for us, it is our responsibility to our nation. We dedicate this honor to the Turkish nation.